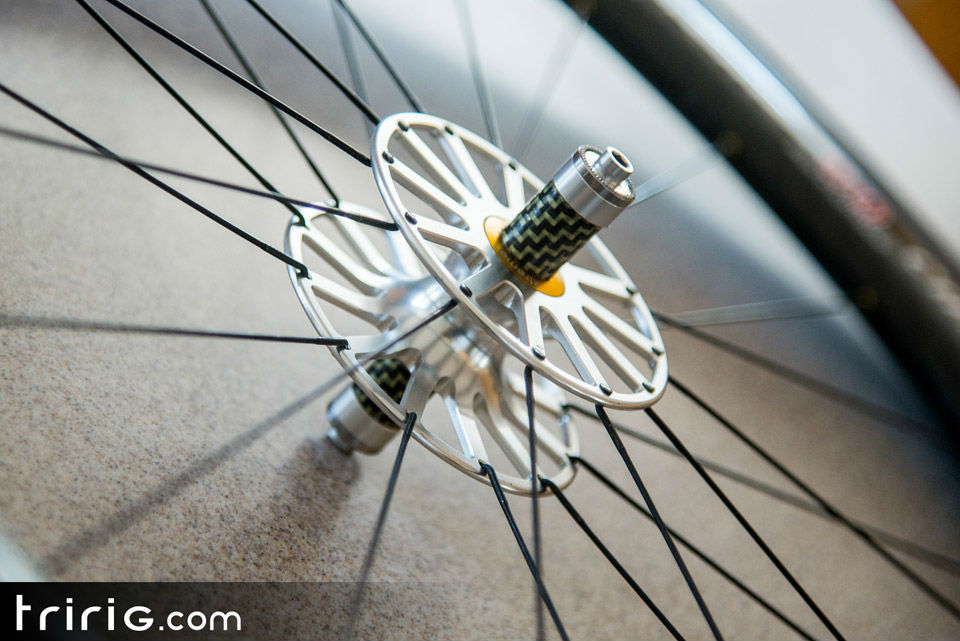 The aero wheel landscape has been changing quite a bit in recent years. Or more accurately, the entire wheel landscape has been changing. The ascendency of disc brake systems (which we will write more about in a later article), the broad acceptance of clinchers by pros and amateurs alike, a focus on increasing rim/tire width, and careful analyses of both aerodynamics and rolling resistance have all become important topics. The result is that consumers have a broader range of choice, an easier time getting confused, but ultimately the choice of many truly fantastic products.

Today, we are taking a look at a pair of wheels that innovates in a slightly different way. The clincher wheels we have from Xtreme Carbon are traditional rim-braking carbon clinchers, and the rims are fairly unremarkable. They feature what appear to be fairly best-practices shaping for what you might call the current “Firecrest” era. That is, the rims are wide, with a blunt trailing edge that makes a decent leading edge when it rotates around and the wind is hitting it from the other side.

At 25mm wide, and around 930 grams for the front 60mm and 200 grams more for the rear 90mm Race Grade versions, there are lighter alternatives. But weight isn’t what Xtreme is trying to innovate. Sure, there are some extra grams hanging around here. But what’s missing is a whole lot of frontal area. When viewed from the front, the spokes are virtually invisible, thanks Xtreme’s custom hubs that feature a very narrow flange spacing.

This kind of design tactic has been all but abandoned in the industry. Felt features narrow flanges on some of their in-house wheels, but that’s the only example I can remember seeing in the last decade or so. Xtreme managed to fix their spokes to the hub with a cleverly designed flange that allows them to stay tucked in around 30mm more on each side than a traditional wheel. Looking at the wheels straight-on from the front or rear they appear to “float” with zero spoke visibility. This design looks a bit strange because of the difference in how the carbon hub protrudes from each side away from the oversized flange.

Narrow flanges, in theory, sacrifice some stiffness and therefore handling characteristics compared to wider flanges. Xtreme’s primary claim, after you wade past the usual generic aerodynamic boilerplate, is that the industry at large has miscalculated the structural requirements for a bicycle wheel. Essentially, they’re saying that the narrow flanges aren’t a problem at all, and that the industry’s concern about narrow flanges is misplaced. It’s always interesting to read a claim that basically says “everyone else has got this wrong.” So we were really keen to try out a set, and see what they’re actually like in practice. We snagged a set and put it through the paces. And amazingly, after a few hundred miles on these wheels, we are inclined to agree with Xtreme. As with any deep-section rim, their large surface area is noticeable but controllable with crosswinds. They seem very capable with not only straight-on headwinds but also winds that have a decent amount of yaw. The narrow hubs did not present any noticeable difference compared to traditional hubs. Handling was predictable and confidence-inspiring. In short, it’s a great set of wheels.

In order to achieve that stiffness, Xtreme ups the spoke count, and uses a fairly large-diameter flange. That probably means that the design isn’t suitable for disc brakes, since discs also require upping the spoke count and beefing up the flanges due to the additional torque forces that braking introduces into the wheel. So don’t expect to see this design with disc brakes. (Fortunately, we think that despite the current trend of disc proliferation, the stalwart rim brake isn’t going away any time soon. But that’s a topic for another day.)

Xtreme claims that the narrow flanges reduce wheel drag by up to 60 percent. However, they don’t really have any public testing data to back up the claim. It would be really nice to see some head-to-head comparisons, because the design concept is sound, and the resulting product is quite beautiful

Xtreme went to great lengths to create their carbon hub assembly and flange to be aerodynamic while not compromising in stiffness for that all-important power transfer. When tested, the wheels don’t seem to flex much when cornering and stiffness is nearly as good as some of the top disc wheels on the market. The wheels could also stop quickly with a durable carbon rim braking surface that halted us just as efficiently as any other carbon wheel we’ve tried to date.

The only major drawback to the wheels is their substantial weight. Part of that is inevitable, just due to the increase in spoke count. And the brake tracks are quite thick, which makes for some really solid braking performance, as we’ve seen in the past. If these wheels were to drop some grams they would be an incredibly enticing option for athletes on any course. For races such as the Ironman World Championships that don’t allow disc wheels they would be a great option as they seem to handle cross winds quite well and are very easy to manage at high speeds. With that being said, weight is generally not a huge concern on tri bikes, and a couple hundred grams up or down isn’t going to affect performance significantly, unless you’re doing the Alpe d’Huez time trial. These wheels could be an ideal all-around racer AND trainer that we would use for years to come. On the other hand, it would be really nice to be able to build these slick hubs with different rims. At present, Xtreme doesn’t sell the hubs by themselves, but it would be really nice to see this as an option at some point in the future. In any event. we’d really like to see some other wheel makers explore narrow-flange designs, and we’re excited to see what Xtreme Carbon has in store for the future.